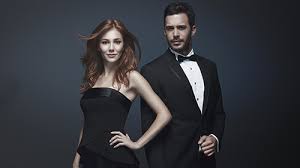 Koray and Sinan have a serious argument that turns into a nightmare as it has detrimental consequences for Koray. Defne surprises Omer with her business sense and Neriman decides to confront Friget about Omer. He surprises Defne with a long-awaited gift.

Neriman meets her match in Fikret, who treats her with the utmost disdain. Deniz finds an ally in Sude and devious plans are made. Defne stakes her claim with Fikret and everybody comes together for the fashion shoot.

Omer and Sinan’s relationship suffers a severe blow at the fashion shoot and a heartbroken Yasemin seeks and finds solace from an unlikely source. Defne is unsuccessful at restoring peace.

The daggers are out! Omer orders Selim to his office to confront him about the gifts he is sending to Defne. Defne learns that Fikret invited Omer for a private dinner and arrives at her house unexpectedly to offer her the challenge of a lifetime. Both parties are staking their claims.

Defne and her family’s home becomes a matter of great concern to everybody. Omer decides to end his partner’s misery, by welcoming the woman he loves back into Passionis. Turkan surprises her family with somebody new in her life.

An excursion for Passionis to obtain a new store becomes an opportunity for Fikret to test Ömer’s loyalty to Defne. Sude is seriously disappointed in Deniz and Koray and Neriman becomes secret agents of note.

While spying on Omer and Fikret, Defne hears the words she’s been yearning for. Yasemin enjoys stringing Sinan along and when Fikret’s declaration of love is unrequited, she decides to call it a day.

Fikret has left and Yasemin is back at Passionis. Defne tries to hide her worries about their home from Omer but he is one step ahead. He asks Nihan to join him for a meal to try and get to the truth. Yasemin runs into Iso at the factory shop and they have a stilted and uncomfortable conversation.

Omer is doing his best to find out what Defne’s secret is and tries to use Nihan to get the information. Ismail has a total meltdown regarding his love life and Sude finds an unlikely sympathetic person to comfort her.

It’s a comedy of errors when all converge on Sinan’s country abode, unbeknownst to each other. A showdown looms between Ömer and Defne about the sale of the house. Fikret throws a final spanner in Defne’s works.

Turkan is overjoyed when she learns that the new homeowner doesn’t want them to vacate the property. However, Serdar and Defne have mixed feelings when they learn the identity of the buyer. Sinan keeps getting mixed signals from Yasemin and Koray refuses to work with Yasemin on the photoshoot.

Ömer is starting to win over the family after causing a shake-up by buying the house, but all gains made may soon be shattered as Fikret’s letter to Ömer arrives.

Passionis has a huge photoshoot for a prestigious magazine. Events take an unexpected turn when they discover who the new editor of that magazine is. Neriman takes matters into her own hands by stealing a letter addressed to Omer. But the letter has its own way of traveling around.

Sude abuses her newfound authority as a magazine editor and pressure mounts for Defne to spill the beans to Omer. Sadri’s illness forces Omer to return to his roots.

Defne’s birthday gets off to a disappointing start, with her colleagues’ gift and Omer’s apparent disinterest.  Koray and Neriman’s altercation leaves both of them distraught but they’re too proud to make amends first. All’s well that ends well and un unsuspecting Defne is finally whisked off by her prince.

A perceived broken arm causes a farcical comedy of errors while excitement abounds for Alp and Sebnem’s wedding. Sinan learns some valuable lessons in love from Ömer.

Sebnem reveals a secret that creates even more pressure for Defne. Yasemin scrambles to correct a decision that could jeopardize her relationship with Sinan. Sude does her best to keep Deniz at bay.

Neriman is desperate to make peace between Omer and his grandfather and blackmails Defne once again. A lovely wedding goes horribly wrong when a secret is revealed. Sinan makes a life-changing decision but is prevented from revealing it.

Ömer and Defne’s happiness inspires Sinan to make a significant move on Yasemin. Defne cunningly gets rid of Türkan in order to spend some time with Ömer. Sude finds herself alone in her excitement about the magazine.

Ismail is distraught when he learns that the custom-made shoe he’s working on will be used in a marriage proposal to Yasemin. Sinan seeks advice on how to propose from an unlikely source, who immediately spills the beans to Yasemin.

Ismail makes a very difficult decision, after working on Yasemin’s shoes throughout the night, to not deliver them, but to toss them into a bin.

The preparations are taking place for Omer’s marriage proposal to Defne and all family is invited, including the Black Mamba, Hulusi. Omer is unaware that his grandfather will be there. Yasemin proposes to Sinan before he gets a chance at it, and both parties are extremely happy.

The ring ceremony goes very wrong and Omer flees the scene, leading to an unfortunate chain of events that leave Defne under siege. Confusion abounds.