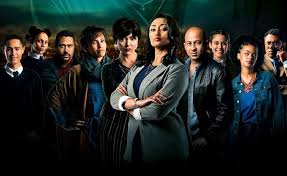 Emile is on a revenge mission and tries to convince Anita to let him testify against Ingrid. Ronnie and Priester are concerned about Ingrid throwing them under the bus and need to make a plan. Anton wants to ask Nicolene an important question.

Daniel assures Angel that her friends are all standing by to help her when she is ready to escape her situation. Debra acts on her guilt feelings about being unreasonable to Langes. Janice warns Bianca that she will have to act fast if she wants to get Thys.

Pandemonium breaks out in court when David’s femur is handed in as evidence. Angel realises that Ronnie and Priester are conspiring behind her back, while Thys takes Bianca out for a drink.

Things heat up in the courtroom as Gertie takes Advocate Arnold on. Ingrid and Angel have an intense face-to-face which leads to unexpected consequences for Priester. Nicolene is worried about her parents’ response to the news of her engagement.

It’s Beatrice’s turn to testify in Ingrid’s court case, and she doesn’t hold back. Priester butts heads with Ingrid about his relationship with Angel, while Nicolene and Anton make an impulsive decision about their future.

An unexpected guest shows up in Arendsvlei and causes a lot of distress for Anton and Nicolene. Janice struggles to keep her cool in court. Angel is shocked when Priester reveals some intimate information about his past.

Angel starts making demands on Priester. Thys announces that he invited Janice and Lionel for a game of Dominos and that Bianca will be coming too. Hein and Lukas discuss their offsprings’ wedding plans and come to a decision. There is drama in court when Bompie testifies against Ingrid.

Hein is dead set on delaying the wedding. Lukas learns the truth about Justin. Bianca invites Thys over for dinner and today is Emile’s turn to testify.

Debra denounces her mother in front of the court. Lennie opens up to Karelse which leads Karelse to senstivie information. Priester unleashes his rage on a terrified Angel.

Priester tries to escape with Angel, and Daniel is in a race against time to save her. Ingrid makes a stunning revelation in court. Thys tries to make peace with Bianca.

Karelse gets information from Angel which places Ronnie in a difficult position. Bianca and Thys’ relationship is progressing, but for how long. Ingrid goes insane in court.

Everbody in the Cupido household is anxious about what the day in court will bring after Ingrid’s strange behaviour the previous day. Gertie makes an unexpected announcement. Debra puts Langes in a predicament. Wesley gives Anton advice on how to deal with his father.

Debra receives shocking news about Ingrid’s court case. Hein and Anton butt heads regarding the wedding arrangements. Thys and Beatrice struggle with the news that Gertie’s moving out of the house.

Daniel is concerned about Angel’s safety. Debra wonders if she’s making the right decision to move away. It’s judgement day for Ingrid.

Debra is shocked when authorities relay unexpected news to her. Janice is flabbergasted when Debra signs Mortlocks over to her. Angel has nightmares about Priester but refuses counselling.

Angel struggles to hide her unhappiness from Daniel. Gertie warns Dominee of a plan to oust him from the church. Dominique tries to seduce Thys. Will he be able to resist her?

Thys is feeling guilty about the incident with Dominique and confides in Lionel. Nicolene ask Alta Marie for advice after having a disagreement with Anton. Ingrid is lonely, defeated and distressed in her new circumstances.

Angel declares that she needs to learn to stand on her own two feet. Anton and Nicolene are looking forward to their marriage and Janice must deal with a crisis at the Mortlocks.